What a great nite we had! The celebrations in honour of 10 years Our Label Records ended with a Zombie picture on one of the famous evil lair style doors of the Mojo Club… and started with a plateful of cake and Funk at Hamburg’s Groove City Record Store.

Just after 3pm, as I dropped a bin bag full of smelly diapers on the street corner (don’t ask), Gu arrived to pick me and cake up. Not that he caked up but the cake was also picked up, but you got that.

A short ride to Groove City and an almost legal parking spot later and we shuffled a few tables around to present muffins and butter cake to anyone feeling the need to stock up on vinyl. Marga was a fabulous host and Gu went straight for the two Technics to spin some 45 Funk. It was lovely to chat to record lovers, colleagues and friends and of course family.

The next station around 6pm was the Jazz Cafe where Uebertribe were already in full sound check swing. We put up a small merch corner and went for a pizza nearby. Oh, after checking into the lovely and spaceous backstage area of the Mojo Club, of course.

On time at 8pm the doors opened to the excellent mix of Mune_Ra who opened with his funky and mellow DJ set. The room filled, beer, coffee and wine was consumed and the last of the muffins quickly got gobbled up by Hamburg’s Funk lovers. 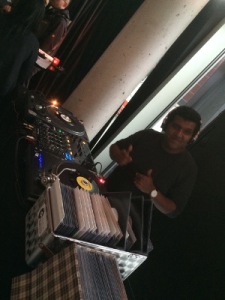 Then Legbo strutted on stage in his funky red and black suit complete with proper hat and the audience gave them a very eager welcome. Straight into the Funk it was from there on. After a few tunes, Legbo called for Maceo, who was busy elsewhere, so a more than suitable replacement took the stage: Kimo, who also plays for Diazpora, blew the funky horn and added a nice extra layer to Uebertribe’s Groove. Mentioning the single, Uebertribe closed with “Game Over“, which they played twice. Apparently, their record producer had said, the single version was too short 😉

Of course the audience wanted more and received an encore in form of Our b-side “The Thief“. Then straight over to Gu, who kept the eager Funksters dancing for a while… and then…

Gu had just put on Billy Garner – Brand New Girl, when it slowly became apparent, that Uebertribe was back on stage, playing along with the track. Gu slowly put the fader down and the band launched into a 20 minute jam,

much appreciated by the remaining audience. Personally, I love these sessions, as the band can really show off its musicianship and how tight the groove is amongst them. I consider this my personal birthday present from the band to Our Label! Thank you guys! 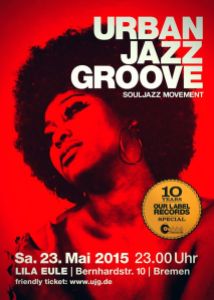 Co-Funkster and Co-Founder of Our Label Records